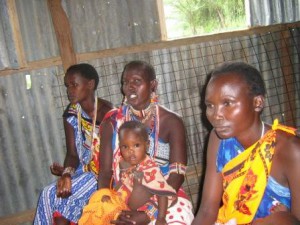 Communities and their rules affect Maasai women’s life much more than Kenyan legislation. The communities follow patriarchal traditions, due to which women are not expected to participate in community decision-making. Furthermore, violence against women, girls’ forced marriages and female genital mutilation are a part of Maasai women’s everyday life. KIOS supported FAMEC has successfully influenced the communities by providing Maasai women training on their rights.

Family Mediation and Concilitation FAMEC is a Kenyan NGO engaged in peace and human rights work. KIOS provided FAMEC a grant amounting to 29 000 € in 2005 for a project aiming to empower Maasai women and increase their knowledge of their rights.

During the project FAMEC organized human rights and conflict resolution courses for 120 Maasai women in Kajiado district. The courses were based on Bringing women’s rights home training manual published earlier by FAMEC, and now translated in Kiswahili. The participants were influential Maasai women, selected with the help of FAMEC’s grassroots partner organization. The participants included social workers, business women, teachers, farmers and housewives. The women’s families were consulted in order to reach a mutual understanding on the importance of their participation. The course gave women knowledge on human rights, particularly the rights of women, and tools with which to encounter human rights abuse and conflict situations. Special emphasis was given to methods with which to share human rights knowledge and conflict transformation skills with other members of the women’s communities.

The women who partook in the course went on to form small local groups in different parts of Kajiado district. The groups advise women in situations of rights abuse, and support conflict resolution in families and communities. Some of the local groups have focused on organising human rights training for other Maasai women, most of whom are illiterate, using mediums such as music and drama.

“This programme has taught me women’s rights I never thought existed.”

At the end of the project the trained women gathered together for a one-day-seminar to share experiences and plan future activities. Empowered by the tools they had received during the training programme, women had been able to prevent a number of young girls from being forced into marriage. Their common experience was that genital mutilation was becoming less common in their communities, as mothers were more aware and able to protect their children. Women spoke of how increased human rights awareness had increased the respect shown to women, and caused women to become more active in different ways. In some villages, women had started small business and formed contacts with microfinance organisations; one woman had been the first in the community’s history to be asked to speak in a community meeting; and three women were planning to run for candidacy in the 2007 elections. KIOS visited the project in 2006, and in 2007 decided to fund a new FAMEC project, during which 120 more Maasai women will take part in the human rights and peace training programme. In addition, some of the participants of earlier courses will be trained in leadership skills, a training manual for women’s leadership skills will be compiled, and the Bringing women’s rights home manual will be translated into the local Maa language.