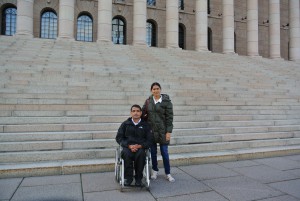 The Finnish NGO Foundation for Human Rights KIOS organizes an event on the promotion of the rights of people with disabilities in Nepal. In the event a Nepalese disability rights activist Krishna Gautam shares experiences of his work as an activist and of his life as a person with physical disability living in Nepal. The event is held on Monday 23rd of September.

Within the Nepalese society disability is often seen as a destiny of an individual. People with disabilities are often left outside the societal safety-nets and services – for example basic education is often far from reach of persons with disabilities. In this regard, Gautam is one of the lucky ones since his parents assisted him to go to school as a young boy. Getting a wheelchair allowed Gautam to enjoy more independence in his later life.

The event is free of charge and it’s held in English.