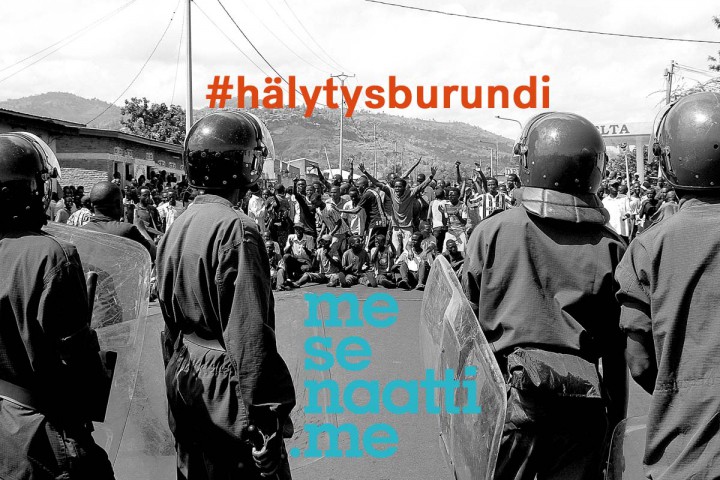 Burundi has undergone a year of violent crisis. So far no end have been seen for grave human rights violations. KIOS’ Burundi-crowdfunding campaign continues until May 9th.

Burundi, in East Africa, descended into chaos a year ago. The political crisis started as the country’s president Nkurunziza, announced to bid for a third term. The constitution in Burundi limits the president’s ruling terms to two. As a consequence, the people took it to the streets of the capital Bujumbura.

A similar political situation was seen only the previous year in West Africa. The president of Burkina Faso, Blaise Compaoré, too, strived to hold on power, but a peaceful uprising of the people made him to step aside.

In Burundi, however, the people were met with a brutal reaction from the leaders. The police forces killed five civilians during the first day of the demonstrations. A year after, at least 700 hundred have been estimated to be killed, thousands imprisoned and 250 000 have fled the conflict to the neighboring countries.

Both Burundian and international human rights organizations have reported killings, torture, sexual violence and other grave human rights violations that the country’s security forces have committed.

The KIOS crowdfunding campaign has gathered funds for Burundian human rights defenders that document the on-going human rights violations in the country. The documentation is crucial, in order to achieve international reaction to stop the conflict. Donate for the KIOS’ campaign latest on May 9th.

Last week the International Criminal Court announced that it will open a preliminary investigation into the events taken place in Burundi during the last year. The KIOS partner East and Horn of Africa Human Rights Defenders expressed their thoughts on the anniversary of the crisis:

“A year ago, no one foresaw that violence in Burundi would reach such high levels, or that the once vibrant community of human rights defenders would be attacked so forcefully. Today, we express our support for the Burundian human rights defenders in Burundi, Uganda, Tanzania, Rwanda, and elsewhere. Today, we thank them for the work they are still doing under extreme duress, and encourage them to continue united and in solidarity.”