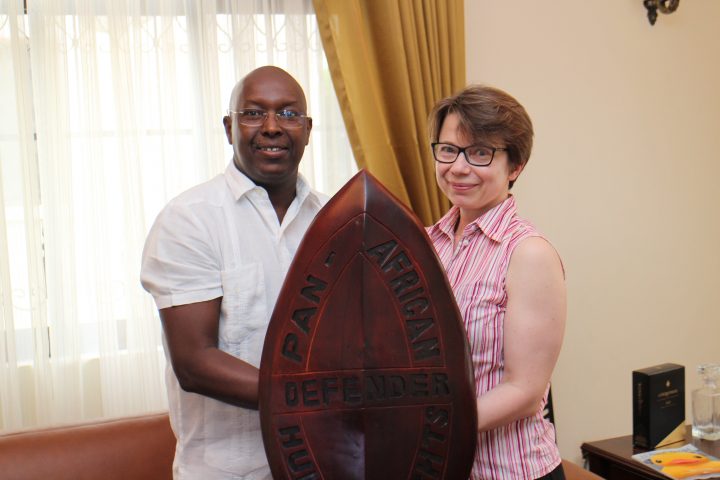 The space of civil society has been diminishing in many East African countries and defending human rights has become even life threatening in some cases. The East and Horn of Africa Human Rights Defenders Project (EHAHRDP) has been promoting the safety and work of human rights defenders (HRDs) for over a decade. In that rather short time EHAHRDP has grown into one of the most influential and prominent human rights organizations.

A year ago EHAHRDP celebrated its 10th anniversary in defending human rights. A human rights defender, exiled from Somalia, Mr Hassan Shire, founded the organization in 2005 in order to help human rights defenders to continue their valuable work. At the moment, EHAHRDP works primarily in Burundi, Djibouti, Eritrea, Ethiopia, Kenya, Rwanda, Somalia, Somaliland, South Sudan, Sudan, Tanzania and Uganda. EHAHRDP has also been the initiating force behind the National Human Rights Coalitions in different countries in the region and has been supporting the strengthening of the Coalitions. For instance, in Kenya and Uganda the National Coalitions work efficiently in the defence of human rights defenders.

The year 2016 has been an overall challenge for EHAHRDP’s work. There is on-going harassment, persecution and physical violence against HRDs in the region. There are also arbitrary detentions of human rights defenders and some even lose their lives in defending the rights of others. “In countries, such as Sudan and Ethiopia, governments continue to clamp down on HRDs rather than address the protracted and worsening crises they face as a nation, or recognise the valuable contributions civil society can make in addressing these problems”, states Hassan Shire in his wrap-up letter of the year 2016.

Especially the escalated violence and crisis in countries such as Burundi and South Sudan has narrowed down the space of HRDs. In order to help the HRDs to continue their work, EHAHRDP offers emergency assistance and training. EHAHRDP has been able to offer immediate assistance to HRDs in the region, also in cases where the mechanisms of many other actors have been insufficient or not flexible enough. EHAHRDP is also part of European Union’s HRD mechanism (ProtectDefenders.eu) which has distributed more than 330 emergency funds to HRDs in one year. The mechanism is led by 12 significant human rights organizations, among those the World Organization Against Torture, the International Federation of Human Rights FIDH, Front Line Defenders and EHAHRDP.

In addition to emergency support and training, EHAHRDP also campaigns and does significant international advocacy work for the defence and protection of human rights defenders and their work. The organization has consultative status to several human rights mechanisms at the level of the United Nations and the African Union. Furthermore, EHAHRDP has made lots of efforts in lobbying the Office of the United Nations High Commissioner for Human Rights to investigate human rights violations taking place in Burundi and South Sudan. EHAHRDP has also influenced many resolutions of the Africa Commission on Human Peoples’ Rights including the landmark resolution 275 on LGBTI rights.

KIOS has been supporting the work of EHAHRDP since 2006 and has followed the organization’s development into an internationally recognized human rights actor. With KIOS support EHAHRDP has for instance enhanced the concrete safety measures and know-how of Burundian and Rwandan organizations. These countries have no other national or regional actors focusing on security and capacity building of human rights defenders, which makes the work of EHAHRDP especially significant. With the help of technical training and support the Burundian human rights activists have been able to report the on-going human rights violations taking place in Burundi to their networks abroad. KIOS support has also enabled EHAHRDP to study and make a report on the challenges and possibilities of human rights defenders in exile. The report has had a positive influence on the practices of Embassies in Rwanda regarding the protection of human rights defenders.

EHAHRDP has launched a new name since the beginning of 2017 and is now the East and Horn of African Human Rights Defenders Project (DefendDefenders).

The Finnish NGO Foundation for Human Rights strengthens the realization of human rights through support channelled to local civil societies in East Africa and South Asia. Currently KIOS supports 37 human rights projects in the regions. In 2016 KIOS supported altogether 56 human rights projects. In 2015, the number of supported projects was 79. The governmental cuts to overall development assistance in Finland have had an influence on the number of projects KIOS is able to continue to support. You can support our work for enhancing human rights at https://kios.fi/fi/lahjoita/.