Women human rights defenders in Helsinki: “Stand by us”

Finland currently holds the presidency of the Council of the European Union, which gives it an unique opportunity to promote human rights defenders. That is why Amnesty Finland and KIOS held a seminar in 29th of August called Supporting women, protecting rights, in which human rights defender from around the world were heard.

The topic of the seminar was the risks human rights defenders face and how the EU could support them more effectively.

The next day four HRDs took their message straight to the EU foreign ministers, who gathered at the Finlandia Hall. For the first time in EU’s history, members of the civil society were invited to the lunch of the unofficial meeting for foreign ministers. They shared their views with the ministers and answered questions.

During the week, HRDs invited to Finland had a chance also to meet with EU ambassadors, Finnish members of the Parliament and officials of the Foreign Ministry. 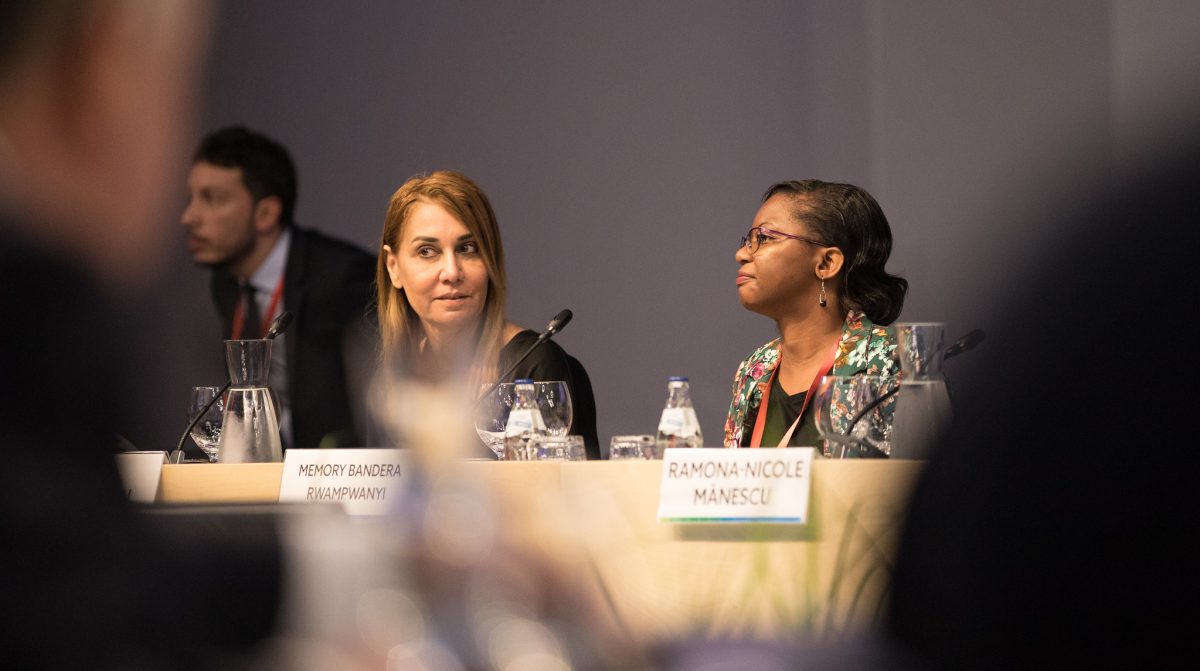 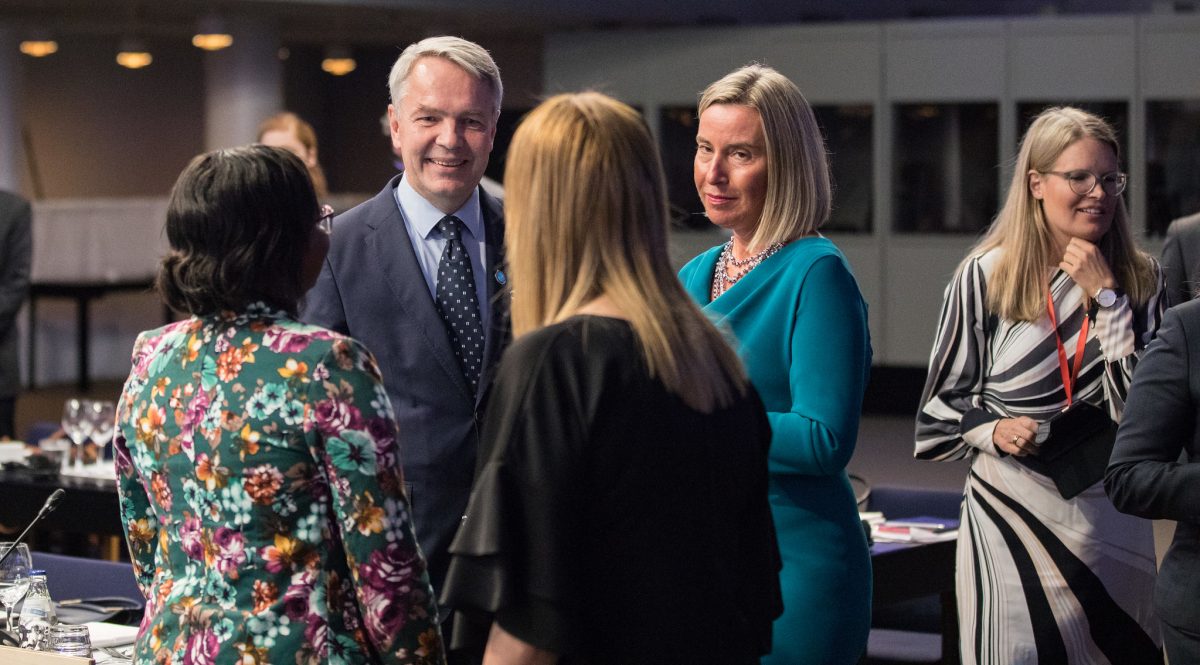 What the HRDs ask from the EU

KIOS invited Memory Bandera Rwampwany to talk at the seminar. Bandera is the Program Director in DefendDefenders, an organization that offers emergency support and security training for human rights defenders in East-Africa and the Horn of Africa.

Attending the panel was also María Teresa Rivera from El Salvador, who was sent to jail for having a miscarriage. Rivera was accused of murder as a result of El Salvador’s strict abortion laws.

Foreign minister of Finland Pekka Haavisto opened the seminar. According to Haavisto, Finland is doing its best in keeping human rights on the agenda during Finland’s EU presidency. The foreign minister was interested in hearing from the HRDs how Finland and EU could do more to promote human rights.

The activists gave many suggestions during the seminar day on how the EU could support especially women human rights defenders. They included: 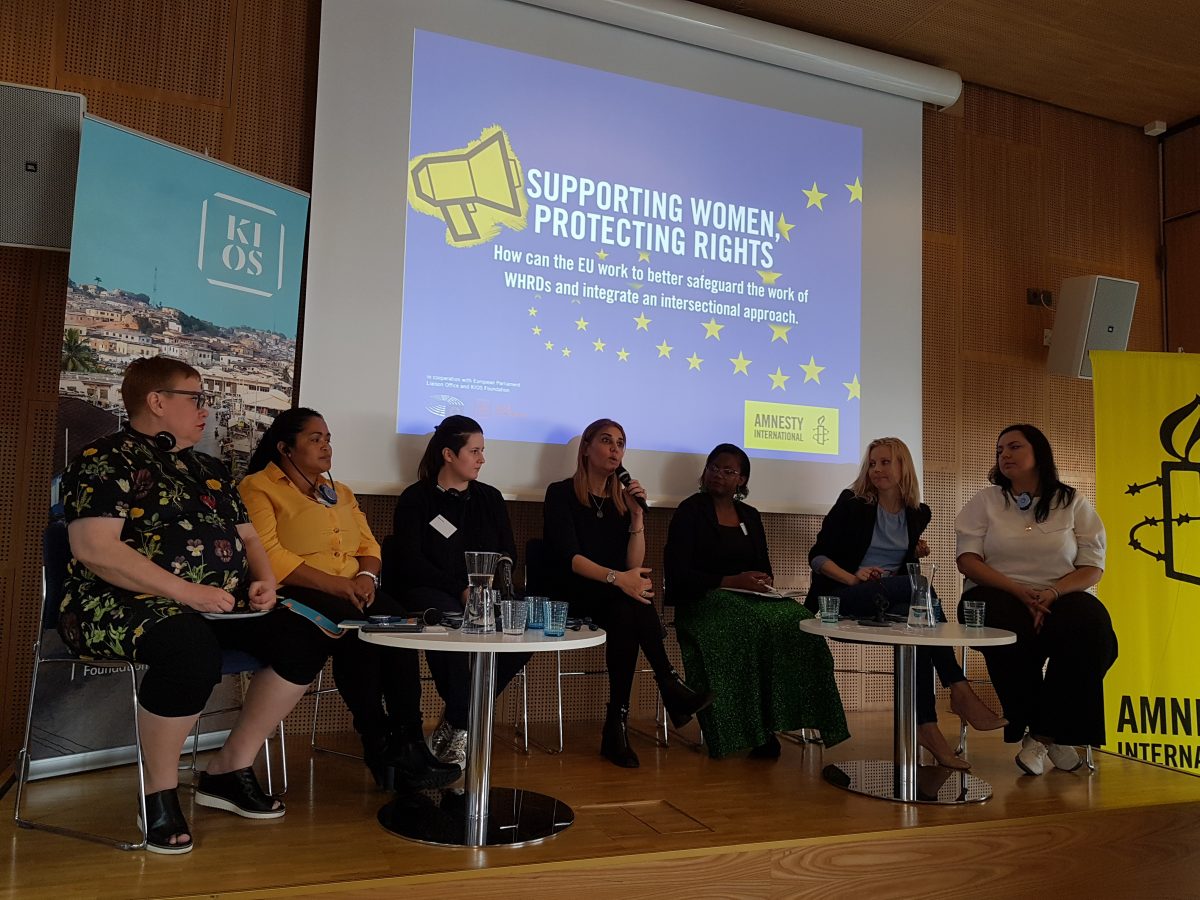 EU support for HRDs is not consistent

The first panel discussion of the day focused on how the EU and its member states protect and support HRDs. Participating in the discussion were ambassador Hannu Himanen, head of the Foreign Ministry’s human rights department Tarja Kangaskorte, head of the EU’s Foreign Affairs and Security Policy Committee Sofie From-Emmesberger and Russian human rights lawyer Irina Biryukova.

Biryukova, who was forced to leave the country temporarily for death threats, told that she received help from EU and from international organizations and now felt more safe than before.

”However, sometimes we need the EU to react faster, especially in emergency situations”, Biryukova said.

It was pointed out how the EU and its member states can help HRDs by following their trials and making public statements. Doing diplomatic work behind the scenes is sometimes the most effective strategy, reminded Sofie From-Emmesberger. Former ambassador of Finland to Russia Hannu Himanen said that the problem lies in the member states being non-unanimous, which results in non-consistent reactions by the EU to human rights violations.

The panelists asked for clearer public statements in human rights questions from the leaders of the state and from the EU. EU should take a stance and not leave these questions for each member state to consider. Political leaders must always bring up human rights in discussions with other states. 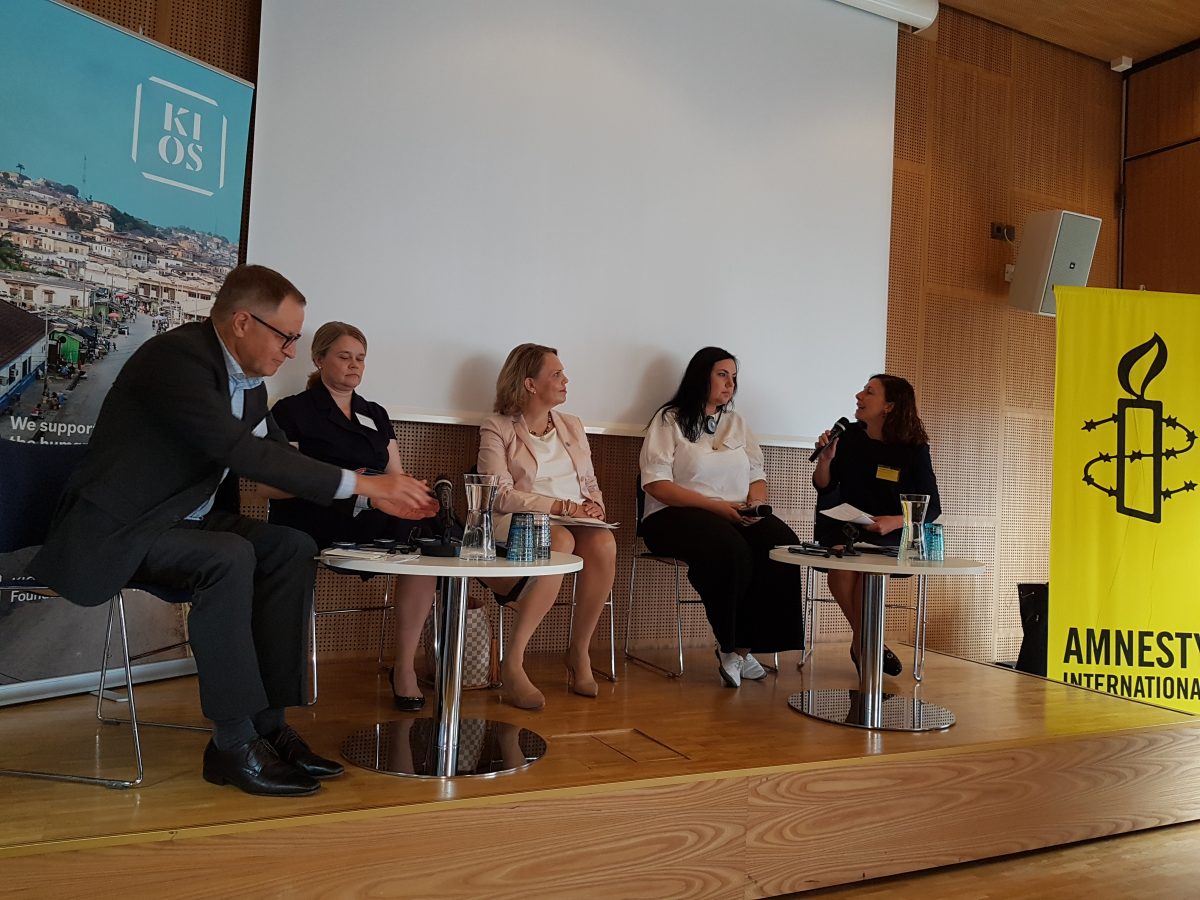 The panel discussion on EU support to HRDs.

In the afternoon’s panel the women human rights defenders told moving stories about the obstacles they face. Defending human rights has resulted in them facing threats, harassment, defaming on social media, attacks by the extreme right, denials to leave the country and exile.

Women HRDs face sexual violence or its threat more often than men. Women who have been raped often keep silent for the shame attached to it.

”Sexual violence and its threat is used as a way to silence women HRDs”, said Nedal Al-Salman.

Religion and family have a bigger influence on women HRDs. Families may be opposed to women being activists and ask them to be silent. Salvadorian María Teresa Rivera reminded the audience that the families of HRDs also need protection. 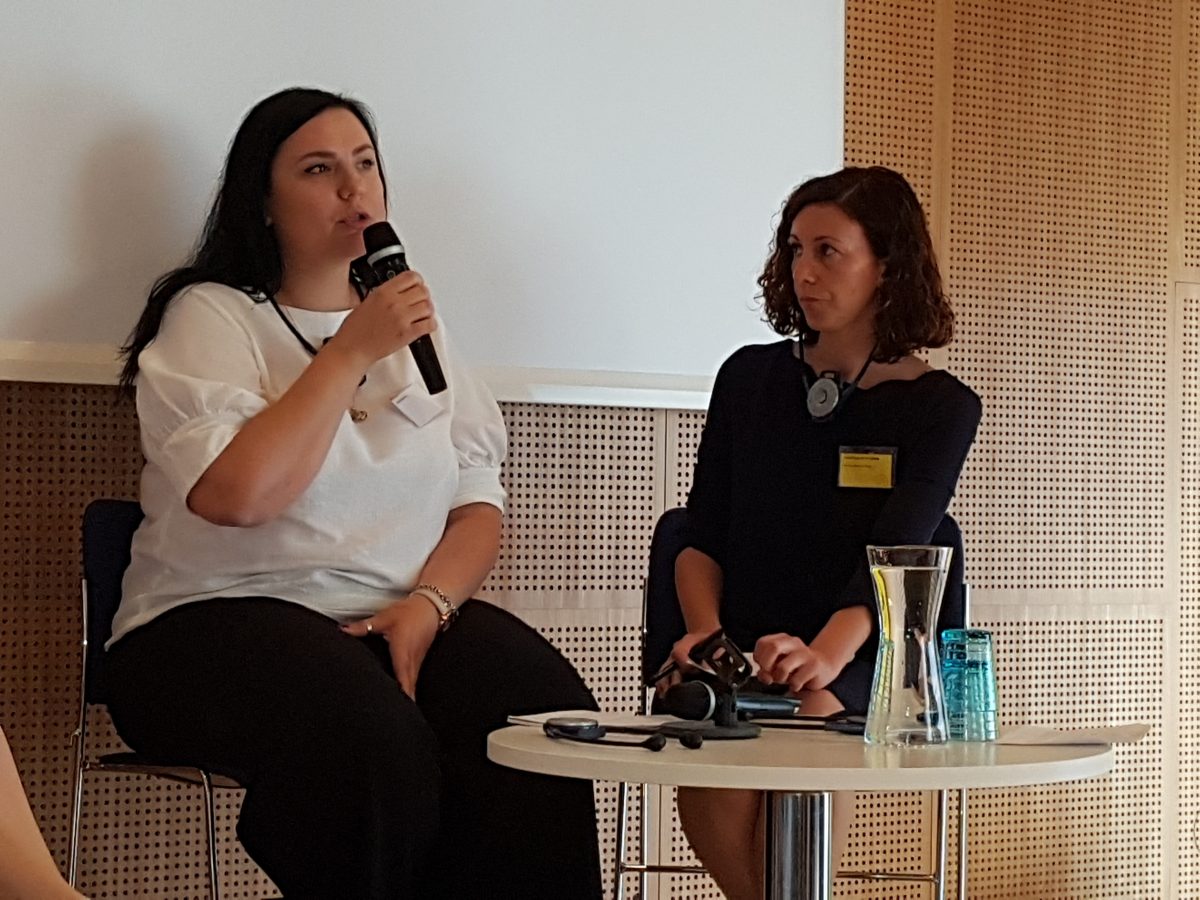 ”By defending one, we defend all”, said Irina Biryukova, Russian human rights lawyer (on the left). Interviewing her is Covadonga de la Campa from Amnesty’s European office. 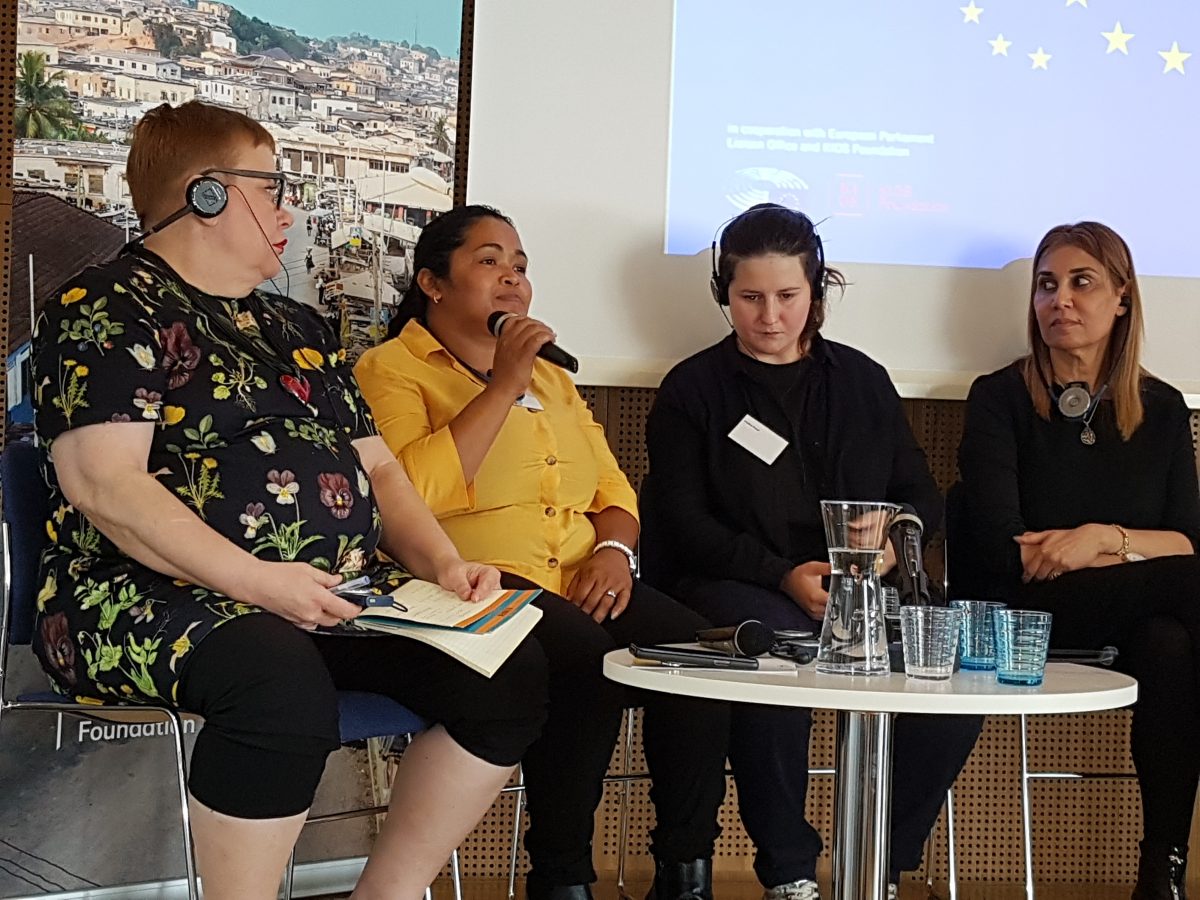