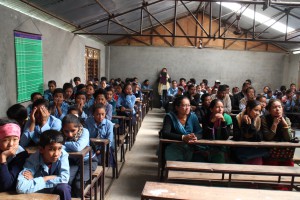 Tasi Lama, the director of KIOS’ partner organisation in Kenya, visited Helsinki in January. In connection to his visit Maailma.net, a Finnish news service on sustainable development, change and human rights interviewed him on the work of Nepal’s linguistic and cultural minorities for a more equal society.

Lama is a part of the Tamang minority. The representatives of Tamang minority in Nepal are still pictured as lower class and they are not encouraged to educate themselves. Childspace, a KIOS supported organization, is conducting advocacy for more equal education structures. In addition, they produce culture sensitive learning materials.

Since the end of the war in 2006, Nepal has attempted to draft a new Constitution that would take into account the rights of all groups. The strongest dispute concerns minorities and the possibility to divide Nepal in to approximately ten states. Some parties of the opposition are supporting the possible division, whereas the parties of the government oppose it fearing the ethnic tensions would mount further.

According to Lama, indigenous people are supporting the division of the country since it would guarantee the respect of their rights and identity.