IMLU Fights against Torture in Kenya with KIOS’ Support 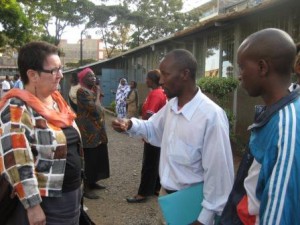 In Kenya, politically motivated torture exists especially in police cells and prisons. The victims of torture are often poor or unemployed, and because of their status, unable to demand for their rights. KIOS’ supported IMLU has for years worked to end torture: IMLU helps the victims of torture, seeks to identify torture, and increases the general knowledge on torture and human rights.

Independent Medico-Legal Unit (IMLU), founded in 1995, is an NGO of 11 persons fighting against torture in Kenya. The activities of IMLU have focused on documenting incidents of torture, providing the victims of torture with medical, psychological and legal services, and advocating against torture. IMLU has a country-wide network of 150 doctors, 50 psychologists and 15 pathologists providing services for IMLU’s customers.

In Kenya, torture exists especially in detention – in police cells and prisons. Torture is generally approved among the police, and a culture of impunity in torture cases prevails. Majority of the victims of torture are poor or unemployed, or lose their job while being in police custody. Due to their status, they are not able to demand for their rights. KIOS started funding IMLU with a grant of 30 000 euros in 2005. The funded project aimed to identify victims of torture. In addition, it sought to document the signs of torture, provide services to the victims, as well as to conduct post-mortems.

”The right to be free from torture is absolute. It applies to anyone, whenever and wherever in the world.”

During the first year of the project IMLU registered 167 victims of torture, 41 of which had either died in detention or were illegally executed. The people surviving torture had either been tortured by authorities or been injured due to political violence. In addition to medical and psychological rehabilitation IMLU provided all the customers with legal counselling but was only able to give legal aid to few customers because of limited funds. The families of the victims of torture were also given individual or family therapy.

Additionally, the project included training authorities and raising public awareness through campaigning. The staff of the project visited prisons in order to monitor their conditions and document cases of torture. On this basis, the staff advocated for improved and better living conditions in prisons. According to estimations made by IMLU, the need for therapy and counselling among the prisoners exceeds what IMLU can offer. KIOS visited IMLU in 2006.

The cooperation between KIOS and IMLU continued in 2007 as KIOS granted IMLU 88 100 euro to continue the project. IMLU was now able to give medical and psychological rehabilitation as well as legal counselling for 784 victims of torture. In addition, 135 post-mortems were conducted. Through 14 prison visits more than 2000 persons were reached. Furthermore, IMLU conducted a research on prevalence of torture in Kenya, organized public events and produced information material for further awareness-raising. Publicity of IMLU in the media increased remarkably during this project phase.